In this tutorial, I’m going to show you how to recreate this wallpaper style: 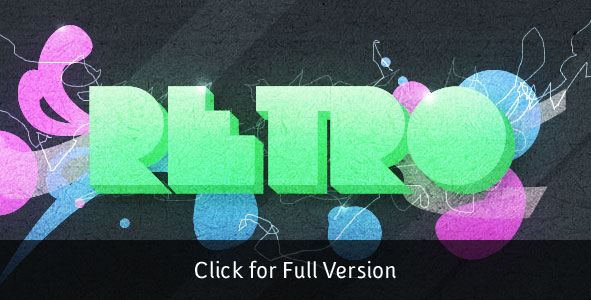 You’re going to need a few things before getting started with this tutorial: 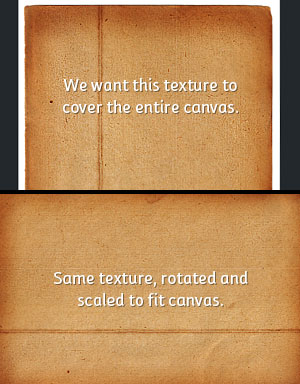 It’s actually very easy to add some basic texture to our design using a stock photo like the one we’ve chosen for this tutorial. Create a new Layer, and Copy-Paste the stock photo into the document.
Now, Transform the layer so that only the texture covers your entire working image area. For me, this involved rotating it, and scaling it down a bit so that no white was visible, and the texture covered my entire canvas.
Once you’ve properly fitted the texture over the canvas, Desaturate that layer (Image > Adjustments > Desaturate).
Set this Layer to Overlay. 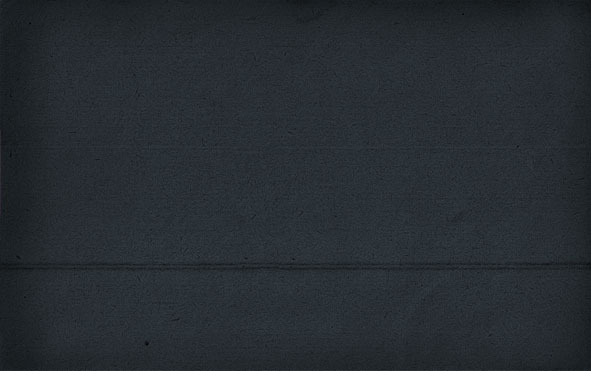 Often times after resizing, an image may lose a bit of it’s sharpness, resulting in texture that lacks in effect. To fix this, sometimes I’ll use the Smart Sharpen Filter (Filter > Sharpen > Smart Sharpen) to bring back the sharp touch.

Create a new layer underneath the texture layer. Using the Horizontal Type Tool, add some text into your document with the font you downloaded earlier. I simply typed ‘Retro’ using a 142pt font. Make the color of your font a light green (#5ee67b).

As you can see, the texture layer we created earlier will automatically add a light texture onto anything underneath it (Unless it is pure white, or pure black since we are using the Overlay filter).

Duplicate your type layer. On your new type layer, change the color of the text to #3aad53, a slightly darker green.
Move the new type layer beneath the light green one. Now use the Move Tool to position it to the lower right of the original layer. Hold Shift while moving the layer so that it moves at exactly a 45* angle.

Step 5 – Filling in the blanks

We have a few gaps in our type that need to be fixed to give the full 3D Type effect. To fix these, we’re going to create some new shapes with the pen tool.
But first, we need to convert the lower type layer to a shape layer (Right Click Layer > Convert to Shape). Now that it’s a shape layer, we can add additional shapes directly into it with the pen tool.
Click the Vector Mask Thumbnail for your new shape layer to display the vector mask.

Grab the Pen Tool from the toolbox. In the Options Bar, make sure Add to Shape Layer is selected. Now when you draw shapes with the pen tool, those shapes will be added to the currently selected shape.
For this next step, you may want to zoom in a bit for best results.
Wherever you see areas in your design missing a 45* angle for the complete 3D effect, draw in a block with the pen tool. Start by making a single point where the angle should start, and then while holding shift, create a new point at the adjacent point of the other type layer. The diagram below better illustrates how to go about filling in the blanks.

Continue this process for all the additional blanks you notice. Once your finished, you should end up with a design like the one shown below.

Add a Drop Shadow Layer Effect with the following settings to your lower text layer:

This will add a nice bit of depth to your design, as shown below. You may need to adjust some of the settings to your liking if you’re working with different dimensions from what I’m using.

Step 7 – Adding a Splash of Color

Create a new Layer JUST above the background layer. Using the Pen Tool, we’re going to draw some funky shapes that will collectively add a nice splash of color in our design. You may want to look over our Pen Tool Basics Tutorial before proceeding if you’re not familiar with it already.
With a bright colored foreground color (such as #e65ee4), draw a swirl using the pen tool. If you are having trouble with the shape, try using the one shown below for reference: 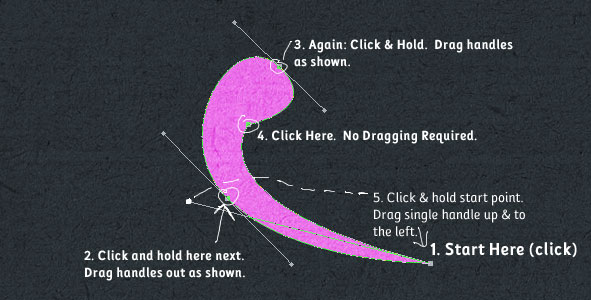 Instead of making a bunch of custom swirls (Which would actually work great, it’s just time consuming), we can duplicate this swirl layer, transform it, and reposition it to add lots of swirls to the image. Here is an example of the single swirl we created duplicated and repositioned 3 different times.

Now, Duplicate the swirl again, and change the color of your new swirl to a different bright color, such as #5e9ee6. Again, duplicate this new colored swirl and reposition it once or twice.

The swirls are a great addition to our design, but too many might make things a bit boring eh? Try adding additional shapes with the Custom Shape Tool, or various other shapes. I’m going to use the Ellipse Shape Tool to create a bunch of multicolored ellipses around the text. I’ll also build a new ribbon shape and throw a few of those into the mix.
When placing the shapes, try overlapping some of them to create new shapes and styles altogether. You can also experiment with different blending modes to mix colors. I find the Lighten blending mode to work very well!

Using a 1px, 100% Hard, White Brush, scribble some lines behind your text (on a new layer). Try to make one continuous scribble throughout your painting, and put some effort into making it as messy as possible.
It’s a bit of guess work getting things to look alright, but after a try or two you’ll probably have something that looks decent. Set this layer to Overlay. For a more powerful effect, duplicate the layer, and add some new scribbles on that new layer.

Select every layer in your layers palette that has been used in the text, shapes, and scribbles (so essentially, everything except the background and texture layers). To do this, hold control while clicking each individual layer. Now duplicate these layers (While selected, go to Layer > Duplicate Layers…), and immediately after doing so, Merge the newly duplicated layers (Layer > Merge Layers or Ctrl + E).
Place this new merged set of layers on JUST below the texture layer. Set it to Overlay and apply a Gaussian Blur of 20-40 (Filter > Gaussian Blur).

We’re essentially finished with the effect, and it looks pretty darn good! We can finish things off with a few polishing touches, or stop here and admire our work!
If you choose to continue, there are a few things I could suggest: